A feisty musical comedy, in the most un-military military base there is. Serving beside Kosher consultants, and corpse purificators, a group of young men is trying to deal with a crazy military rabbi who wants to shut down their choir. 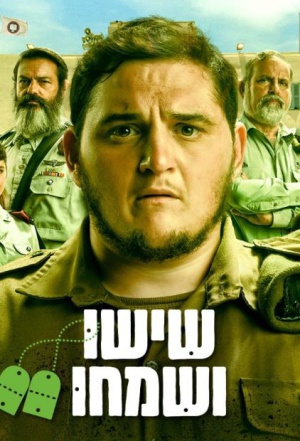 An Israeli musical comedy centered on the military rabbinate choir. Their mission is to perform in front of the units and raise the armys' spirit. But the choir hasn't been performing lately, not in front of soldiers and even not at their favorite event: The International Bible Contest.

Nachuime has always dreamed of being the choir's soloist. He's been there a long time and has the needed motivation. His motivation is named Pninit. Although she wanted a paratrooper boyfriend. But if not a paratrooper, at least a soloist.

Mandy, the choir's commander, gives the solo to Dudi, an ultra-orthodox YouTube star, who gyrates like Elvis. He believes that with him they could land a gig and maybe even be invited back to perform at the International Bible Contest.

But General Elhanan Vizner, who jumped on a grenade to save his soldiers and lived, has one clear mission, to restore the military rabbinate's honor, meaning: shut down the non-functioning choir.

The war between those forces unites the choir and brings a new pure voice no one has heard yet. A voice that may bring the choir even to the International Bible Contest.

"For God's Sake" is a feisty musical comedy, in the most un-military military base there is.